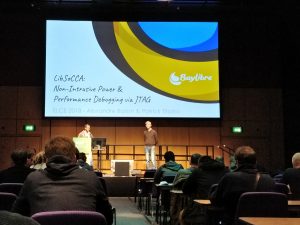 It’s the end of holidays and we’re ready to tackle September in fine fettle.
Two major conferences are taking place in the Embedded and Open source community.
BayLibre is sponsors at those events. We are longing for them for good reasons!

Two Jedi of our team, will demonstrate their power as embedded systems experts.

The first edition of the Embedded Recipes conference, #er2017, will take place in Paris, the 26th of September 2017.

Just as it’s big sister, Kernel Recipes, the objective is to bring together a developer community.

That day will be dedicated to Embedded Open Source actors.

Neil was keen on computing at the youngest age. He obtains his degree of engineering in computer science from Polytech Nice-Sophia.

He got into Neotion as a Linux embedded system engineer.

From this experience he has got increasingly interested in the Open source community.

We wish a happy 6th edition to Kernel Recipes!

A great, human and professional experience as always.

A unique track of conferences on subjects as varied as:

Early in computer science, he earns a Master of Science in Electrical Engineering from the University of Seattle.

Then in 2003 he decides to settle down in France and joins Texas Instrument. He works there as a Linux Kernel developer and meet his future collaborators.

Later he returns Seattle and Texas Instrument for a few years. He finally decides to join the team BayLibre.

The subscription is limited so unfortunately there are no more places left.

Think about it next year and be sure to subscribe!

BayLibre will attend the Innovation Summit by Sierra Wireless, on June 13th, at the Eiffel Tower Novotel in Paris.

It’s a great opportunity to mingle with BayLibre and other industry experts in the IoT space.

BayLibre is passionately involved in technology and innovation. Supporting clients such as Google, Texas Instruments, Fossil Group and so much more.

We are experts in low-level programming and development, on Linux embedded system and Android.

We are ready to commit ourselves to bring our support, competence and skills to your IoT projects.

Do not hesitate to contact us before, during and after the summit.

Discover some more about the Summit !

BayLibre will attend the Vivatech Innovation and Technology Fair, June 15th through the 17th, in Paris, Porte des Expositions. Come join us, we look forward to meeting you and sharing with you.

Innovation and technology are at the heart of BayLibre. We pride ourselves on our expertise in low-level software development, open source software, and world-class embedded Linux and Android know-how. We apply these skills and knowledge to our client projects in IoT, camera, mobile, wearables, health, automotive and consumer electronics markets.

We could not miss the opportunity to go to this event that brings together other industry experts and game-changers like us. We hope to see you soon, do not hesitate to contact us, we will be happy to have a chat with you.

During the ELC Showcase event, BayLibre showed, among other demos, Quake III Arena running fully accelerated on an Odroid-C2 powered by the Amlogic S905 SoC.

This particular demo was running the lastest Linux 4.10 release with some in-development patches for HDMI Support, Audio and Mali acceleration that will certainly go into the next Linux releases.

The technical showcase poster is available as PDF Version.

Patrick talking about Power instrumentation in the kernel at #lfelc pic.twitter.com/pzf2mI3q5q

Our very own @Superna9999 gives a presentation on supporting AmLogic SoCs in the mainline #Linux kernel! #lfelc @wanyong_victor @LibreELEC pic.twitter.com/Iwfeq09elp

If you missed the event, here are the slides :

October 11 was the third anniversary of the founding of BayLibre and the team celebrated in style! As usual, this anniversary occurred around the same time as Embedded Linux Conference Europe. Both the US team and the France team travelled to Berlin for the conference, delivering several talks and presentations along the way, and then enjoyed a long weekend in Wrocław, Poland to finish the team celebration.

In addition to our anniversary celebration, BayLibre has created a short video highlighting our expertise, our strengths and the ways in which we deliver value to you, the customer.

ELC-E was a great event in 2016 and BayLibre looks forward to seeing you next year in 2017!

BayLibre is a leading embedded software services provider. We develop device drivers and maintain both platforms & subsystems in the Linux kernel. BayLibre ports and customizes Android and Yocto for a variety of CE devices, including Wearables and IoT. 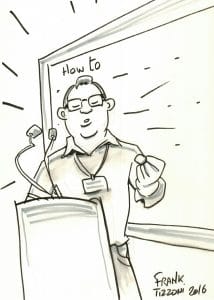 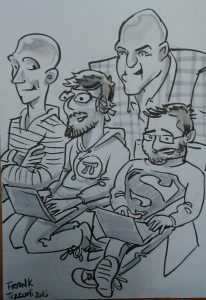 I was a speaker again this year, and  gave a talk about the kernelci.org project.  The talk was a brief overview of the project, its history and ways to contribute.   Slides available here and video recordings are also available.

One of the fun parts of Kernel Recipes was all the speakers and some lucky audience members got caricatures of them drawn by artist Frank Tizzoni.  Here is one of me and one of the crowd, with a bunch more available on Kernel Recipes Twitter feed.